Last week in Tokio's Discord chat server someone asked a really interesting question: how can you stream a multipart body from an incoming request into an outgoing request? My struggle to answer this really helped me understand Rust async lifetimes. We'll explore why this is tricky, then design and benchmark a solution.

Note: all the code is in a full GitHub example.

I'm rather new to Rust, so perhaps I'm trying to bite off more than I can chew, but I can't find any way to stream an axum::extract::multipart::Field to the body of a PUT request made with reqwest. Obviously, waiting for all the bytes works just fine, as in this test handler:

Everything I've found for using a stream as the request body requires that the stream be 'static, which of course the fields I'm getting from multipart aren't.

But it turned out to be harder than I thought.

Why streaming instead of buffering?

Why not just buffer the whole body into memory? Is streaming really that important? Well, yeah -- if you're building a proxy, streaming is worth the extra headache, for two reasons:

Second, memory overhead is huge with buffering. Say you're proxying a 10gb MacOS system update file. If you buffer every request into memory, your server can't handle many parallel requests (probably <10). But with streaming, you can get the first n bytes the client, proxy them to the server, and then free them. No more crashing the process because it ran out of memory.

So we really want our proxy server to stream requests. There's just one problem. Our HTTP server and HTTP client seem to have contradictory lifetimes.

Axum's Multipart extractor owns the incoming request body. It has a method next_field that returns a Field type. That Field is a view into the data from the main Multipart body. It just borrows part of the multipart data. This means the Field is actually Field<'a> where 'a is the lifetime of the Multipart that created it. 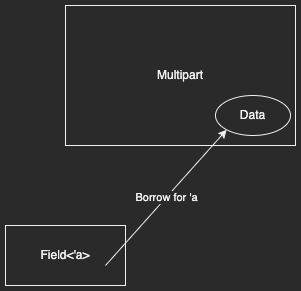 Clearly the field can't outlive the Multipart, because then Field would be pointing at data that is no longer there. Rust borrow checker stops us from doing that. So far so good.

You can read data from a stream, either by reading the whole thing into memory (as above), or using the Stream trait. This trait is defined by the Futures crate here and implemented here. Streams are basically asynchronous iterators. When you try to get the next value from them, it might not be ready yet, so you have to .await. This is perfect for reading HTTP request bodies, because you can start processing the body as it comes in piece-by-piece. If the next bytes aren't available, your runtime (e.g. Tokio) will switch to a different task until the data arrives.

So, now we know how to stream data out of the body. What about streaming data into a new request's body?

We'll use reqwest as the HTTP client. Reqwest can send various things as HTTP bodies -- strings, vectors of bytes, and even streams, using the wrap_stream method. The problem is, the stream has to be 'static, a special lifetime which means "either it's not borrowed, or it's borrowed for the entire length of the program". This means we can't use Field as a reqwest body, because it's not 'static. It's borrowed, and it's only valid for as long as the Multipart that owns it.

Why does reqwest only allow static streams to be bodies? I asked its creator Sean McArthur.

Sean: Internally the connection is in a separate task, to manage connection-level stuff (keep alive, if http2: pings, settings, and flow control). The body gets sent to that connection task

Adam: So basically the connection task takes ownership of all request bodies? And therefore bodies have to be 'static because they need to be moved into that task?

But there is a solution. The field type is Field<'a>, so it's generic over various possible lifetimes. We just need to make sure that the specific lifetime our server uses is 'static.

Note that the Multipart object itself is 'static. Why? Because it's not borrowed. The next_field type signature is next_field(&mut self) -> Field<'_>. What's that '_? That's an elided lifetime. Basically these two signatures are equivalent:

So, the field type is Field<'a>, but that 'a is generic. Its definition works for any possible lifetime. We just have to make sure that when our server's handler is compiled, it knows that 'a is 'static.

The key insight is that, if you want to use a stream as a reqwest body, it can't borrow anything. Because if it borrowed data from some other thread which owns data, what happens if the owning thread dies? Your body would keep reading from the freed memory, and Rust won't let that happen. This means the stream has to own all the data being streamed.

Once I realized that, the solution emerged. We'll define a new type of Stream that owns a Multipart and streams data out of its fields.

All this means that the stream doesn't borrow anything. It owns all its data -- both the multipart and its fields -- so the stream is 'static. Now you can pass it to reqweset::Body::wrap_stream.

The last thing to do is actually use this MultipartStream wrapper in our endpoint.

Note, this example uses Axum 0.6.0-rc.1 with its new State types. It's possible that it might change a little before the final 0.6 release. See the announcement for more. State is basically like an Axum extension where the compiler can guarantee it's always set. This perfectly solves the problem my previous post about Axum complained about, where I know the extension is always set, but the compiler doesn't, so I need a dubious .unwrap()

I ran some benchmarks on the repo. Basically I used curl to send the proxy server a Multipart body with 20 copies of the Unix wordlist. Then the server proxied it to a second server, which prints it. I compared the streaming proxy above, with a proxy that buffers everything. You can see the full setup in the GitHub example.

Because I ran this all locally, I don't expect much difference in total time. After all, the latency between processes running on my Macbook is pretty low. So doubling the latency won't matter much, because the latency is nearly zero anyway. But I expect the RAM usage to be very different.